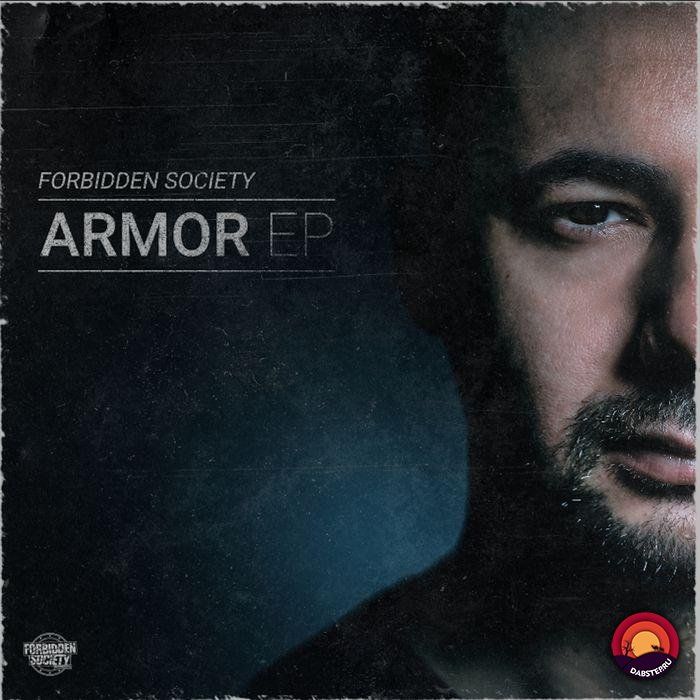 Turbo / Nitro
Forbidden Society has been showcasing a new side to his musical
reportoire over the last few releases. The Czech producer is musically
exploring the genres that are close to his heart, and after premiering his new
bits to some of his closest allies he decided that it's time for the world to know what he has been up to. Armor EP is a collection of tracks that carefully thread into deeper territories while maintaining the advanced sound design that FS is renown for.

The title track Armor is a work of percussion laden complexity. Taints of industrial and tech sounds are balanced out by daring rhythms and otherworldly FX. Chamber 67 is a somewhat more rugged cut that goes very tech influenced. The Czech producer goes more avant-garde then before and has the clever programming of the advanced sounds in this track to show for. The Cold Man resumes on this path. This track is based around a futuristic vocal and thumping drums that stay energetic throughout.
''Threshold'' is maybe the most emotive FS work you've heard before. A meditative female vocal floats on the rolling drum work like a cloud. This showcases a more soulful side to the new palette FS has been exploring on this record.
All things come to an end and therefor ''Forget The Past'' has been chosen as the final cut on this record.Beautifully rich piano textures are the centre of this melancholic piece of Drum & Bass. A breezy atmosphere contradicts the dark tones of the advanced synth bass sounds that serve as the back bone of this release. For avid followers of Forbidden Society. Don't be afraid, the producer is expanding his horizons with music that he has always loved. This doesn't mean that he won't put out records in the sound you are used to in the future. This is just a new side path that completes the musical world of FS' liking.