This album is not found in large quantities in Google, it is not on YouTube and VK knows almost nothing about it. However, this album is the bomb. In three words: melodic, fast, sensual. This is the best of the domestic liquid funk for today and for 14 years no one has been able to make it cooler. This album is a gift to an adequate drum and bass DJ.

How often can you come across a longplay, from which it is not a pity to throw out 8-9 passing tracks, attached by a trailer to two hits? Blastoram has twelve themes, of which at least seven have the status of a club anthem. Their obscurity once again makes me think about how overrated the layer of top music with its hype artists, whose records are worthy of neither attention nor respect. In 2018, when Blasta's debut album turned ten years old, 12" turned to the author of the music for a couple of lines. The author did not refuse :) Listen and read!

And winter came
It all started a few years earlier, in the same gloomy and snowy St. Petersburg winter with the album “In Hundreds of Years” on Walkman's cassette. On this cassette, the instrumental moods of Yuri Usachev and Evgeny Arsentiev are already very characteristically manifested. Those who soon defined the timeless level of their album Time is Sand. And it was during these years that my consciousness turned out to be as open as possible to the emotional perception of music, since emotions were sometimes seething. And the first ListenUp!, acquaintance with Zhenya, a new wave of atmospheric drumfunk - all this led exactly 11 years ago to the appearance of a cover for "Winter", which, in my opinion, is impeccable even without that. It is rather an expression of respect and gratitude for this wonderful work. An expression that materialized without any contradiction or difficulty on my part.

I wanted to keep a lot of the original sound and try to work it out as respectfully as possible, using new discoveries in production. Vocals, as in many tracks on the album, he sang himself, since he sang these lines regularly already. I added my favorite vocoder along with the voice, this is the influence of Chicane and my own trance experience.

About the synth solo is worth mentioning separately. It seems that it was Zhenya's solo that influenced my own work in the strongest way. A legato melody with one oscillator with abundant echo, the mental heritage of Gagarin and Soviet electronic engineers touches the same strings in the hearts of Russian musicians. The very idea of ​​a solo, some kind of free melody in a habitually looped rave, jazz on jungle as a space conductor, fascinated me so much that for a long time (together with the influences of the Caribbean and Underworld) inspired synth solo in my ambient and jungle tracks. These melodies flare up in the composition as a luminous live ribbon of freedom, lightness, and in the case of the solo from “Winter”, on the contrary, piercing light sadness.

In my version, it seems to me that the general mood has shifted significantly towards tragedy due to the added dissonant chords of the pad. Of course, to a large extent, such moods are inspired by Seba tracks featuring Robert Manos, which broke the hearts of all jungle players then.

Vintage ringtone, voice from the phone:
"Hello, Yura? Hello. This is Vova, St. Petersburg. Zhenya gave you your number. I left a cover of "Winter" in the mail.."

I took Yura's phone from Zhenya, called, said that he had done a cover and would like it on the album. Yura asked where the album was being published, after which he said that he was not against it and would check the email. There doesn't seem to be any feedback from him. But with Zhenya, already under the name Medicine, we saw each other regularly in Griboyedovo for a long time, exchanged music and were good friends.

In autumn and early winter of 2007 I finished some old tracks, started a couple of new ones and spent every other Sunday in Griboedovo. The stage was in full swing, the dance floor remained full until 6 am, and drum and bass turned to an emotional sound. Nail's "Pirate Station" was on the radio eight hours a week, broadcasting the latest mixes from the UK. My tracks regularly appeared on the compilations of his Respect label. And around the same time, he suggested that I release an album.

Don't say to me a word
Tomatojaws is one of my most amazing, vivid experiences, subtly aligned with my own musical passions and interests. Still in the same walkman in warmer weather, I really liked to wear chill house cassettes, on which the first releases of Naked Music slipped through. A little later, I collected a large collection of releases from this label and still have not heard the best music for the summer heat. In the wake of these impressions, I first heard and saw Tomatojaws on the Kazantip beach in 2005. Two or three more of their performances there, including an afternoon on the water dance floor among bathing ravers, personal acquaintance after one of the sets, promo CD, Internet — so there were two of my remixes on Tomatojaws. The second one, Movin' to u, was released on the All-Russian Drumnbass Convention compilation.

The lights
This is probably the oldest track on the album. I didn't think about it at all initially. Kostya suggested turning it on. Even more like this: he was surprised that he was not on the list. This track was previously released on Respect and became one of the ListenUp! Of course, the harmony was restored and "Lights" entered the tracklist. Some time ago, the label held a remix competition for it. The winner was Sobersoul, one of the brightest and most intelligent-sounding representatives of the next wave of ListenUp!, who gave the old track a fresh atmospheric sound. Outside of the competition, it's worth listening to the juke-remix by Signor Mako on my soundcloud, it's also very good!

Gone
The track is erroneously called Lost in many stores, and on the CD it was in the hidden status - it was recorded a couple of minutes of silence after the end of the last track in the playlist. Laser Easter egg. When you listen to a disc, this track starts to play imperceptibly, and only then, when you try to figure out what is playing now, you realize that there is no name in the tracklist, and according to the timer, the last track stretched for 15 minutes. I found hidden tracks on cd more than once, and of course could not but participate in this tradition.

The dubstep bonus Gone on the drum and bass album almost marked a significant turn in my musical interests, although I did not put this meaning into the title. 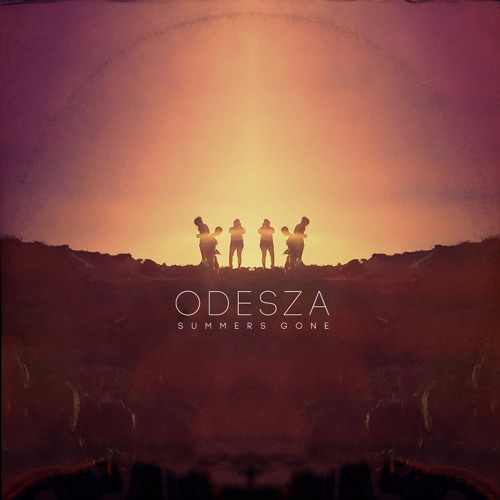